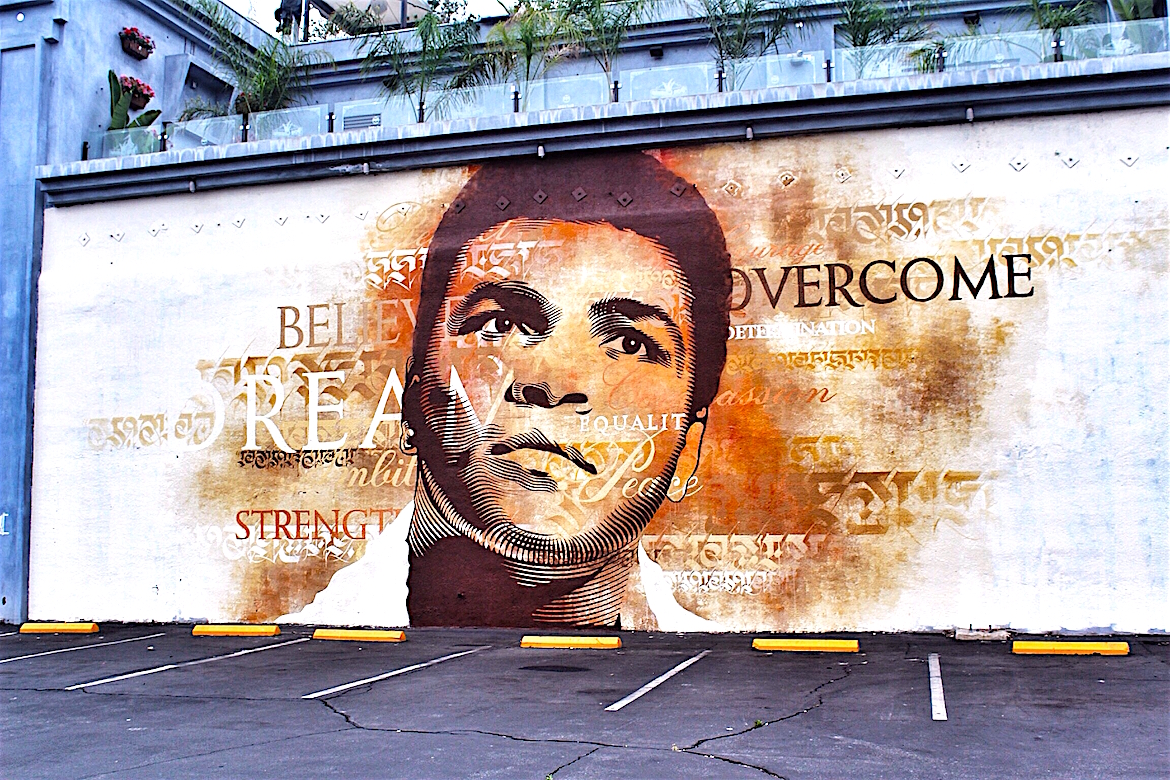 Muhammad Ali was, among other things, a proud Black man. He embraced his Blackness, and often referred to it.

“I am America. I am the part you won’t recognize…”

[/one_third_last][two_third padding=”0 15px 0 0px”]He is often quoted for saying he had no quarrel with the Vietcong, but less frequently quoted for saying, in the very next sentence, “the Vietcong never called me a n**r”. Muhammad Ali was unapologetically Black. Why, in death, are white folks claiming that he “transcended” race?

White people must think it some kind of compliment to say someone “transcended” race. I consider it an insult. Race is nothing that someone has to overcome, or “rise above”. Race is not an impediment. It is simply a fact. Muhammad Ali is the greatest, the amazing, the outstanding boxer and humanist and he is a black man. Nothing to transcend. Something just to be.

I have never heard anyone say that a white person transcended race because, perhaps, whiteness is not perceived as a handicap, as something to rise above. Whiteness is perceived as the norm, and everything else is perceived as at least somewhat deficient. This manner of thinking is what allows the likes of Donald Trump to disrespect a judge because his parents were born in Mexico. It is the kind of thinking that allows a judge to sentence a teenaged white Stanford rapist to six months in jail because he would be damaged by jail time. It is the kind of thinking, indeed, that compelled tens of thousands of people to call for the parents of a black child who fell into a gorilla pen in Cincinnati to be investigated by Child Protective Services. It is plain and simple white skin privilege that allows a white person to speak of an African American icon as having “transcended race”.

Why not say that Muhammad Ali has “universal appeal”. Why not speak to his humanism and his kindness? Why is it necessary to implicitly put his blackness down, to compliment the man while going negative on his race? He never went negative. He was essentially, and centrally, a black man. After all, he converted to the Nation of Islam when he was in his early twenties and had adhered to that faith for the rest of his life. His friendship with Malcolm X was likely the foundation of his unwillingness to be drafted to fight in Vietnam. Many African Americans decried his conversion, but he was so firm in it that he fought all the way to the Supreme Court to protest his elimination from professional boxing.

‘Joe Frazier Throwing Punch’ by Muhammad Ali Graphic Art on Canvas by iCanvas
DR. JULIANNE MALVEAUX
PROLIFIC AFRICAN AMERICAN – Economist, Author, Liberal Social and Political Commentator and Businesswoman
Dr. Malveaux has long been recognized for her progressive and insightful observations. She is a labor economist, noted author, and colorful commentator. Julianne Malveaux has been described by Dr. Cornel West as “the most iconoclastic public intellectual in the country.” Her contributions to the public dialogue on issues such as race, culture, gender, and their economic impacts are shaping public opinion in 21st century America.
MORE | WEBSITE

[two_third padding=”0 15px 0 0px”]
Through it all, Ali was outspoken and defiant. He proclaimed, “I am America. I am the part you won’t recognize. But get used to me. Black, confident, cocky; my name, not yours; my religion, not yours; my goals, my own; get used to me.” White folks kind of got used to him, but they attributed their acquiescence to the fact that Ali had “transcended race”. What he actually did was eluded them – he took no tea for their fever. He was a Black man, an unapologetic Black man who cared about humanity because to be Black is to be human, not to be transcendent.

There is so much of Muhammad Ali’s life that is inspirational. Yes, he was an amazing boxer, and he was also an amazing human being. He stood for what he believed in, regardless of the cost, losing his prime years of boxing because his religion was pacifist. He did, as he said, float like a butterfly and sting like a bee. He stung with his fist and with his words. He made us smile, he made us laugh, and he made us inhale with his awesome athleticism. And when he succumbed to Parkinson’s disease, he made us marvel at his grace and dignity.

Whatever we have to say about Muhammad Ali, let’s not say that he “transcended race”. He was a Black man. A courageous man. An unapologetically arrogant man. Yes, he had universal appeal. But according to him, he was always Black.

Julianne Malveaux is an author and economist. Her latest book “Are We Better Off? Race, Obama and Public Policy is available at juliannemalveaux.com and Amazon.com