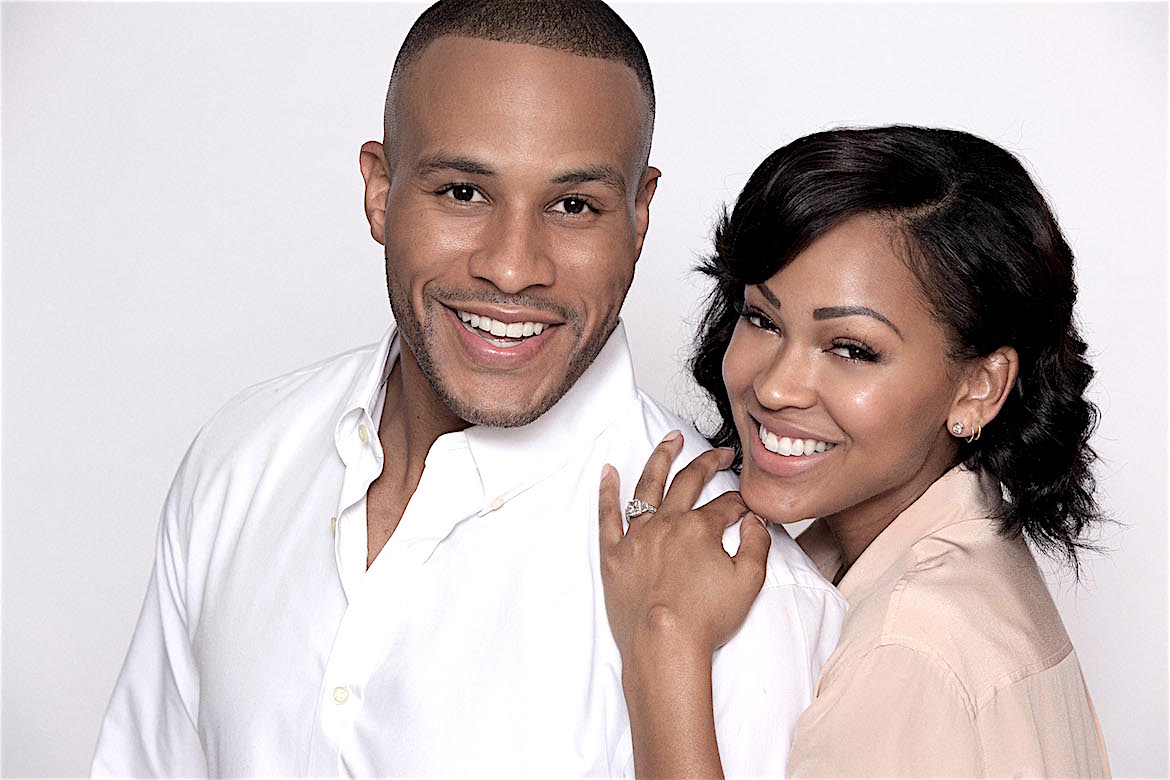 When the beautiful talented and sexy actress  Meagan Good announced to the world that she and finance former Sony Pictures executive DeVon Franklin turned preacher were practicing celibacy, mouths dropped and the words were on the lips of people across the U.S. especially in Los Angeles and Hollywood. How could an actress in their world declare such a thing let alone actually do it?

Thirteen months later the couple said “I do” during a fairytale sunset wedding at a Malibu, California, winery in 2012  and their wedding night they consummated their union. The Hollywood power couple insists that waiting to have sex until marriage was key to their relationship.

Meagan has shared that later she realized that  past relationships where she felt pressured to engage intimately  because of the fear that her love interest would cheat because she wanted to withhold, the relationship ended anyway.  The epiphany moved her  to become a born-again virgin — which, coincidentally, was a choice Franklin had already committed to in light of his ministry. Still, it wasn’t easy for them to suppress their physical attraction for each other.

Good is the first to admit, “It was very tough. It’s interesting because I think it was harder for me,” she said in an exclusive interview with ET February of this year.

Husband DeVon Franklin, exclaimed,  “When a man finds a woman he loves, he will go through hell and high water for her even if she presents this crazy idea of waiting, and he has no desire to wait.”

Today they are three years strong into their marriage and find themselves often asked about their decision to abstain until marriage, the experience, how does that work and all the other numerous questions which lead them to recognize  the importance of sharing their story.

The faith bearing couple now has a recently released book out called The Wait: A Powerful Practice for Finding the Love of Your Life and the Life You Love adding  the accolade, ‘New York Times Bestselling author’ behind each of their names. They also offer, “Welcome to The Wait 101: Discover the Love of Your Life taught by the–an exclusive course from by their new book The Wait on mastering delayed gratification for a life you love.

Franklin told ET, “We see splits every single day, especially in Hollywood.  “How do you make it work? What makes it right? Praying together and going to church together, reading together and keeping God in our relationship is critical. She’s the number one priority in my life.”

Meago co-signed the sentiment, “And he’s the number one priority in my life.”

In The Wait, DeVon and Meagan share the life-changing message that waiting—rather than rushing a relationship—can help you find the person you’re meant to be with. Filled with candid his-and-hers accounts of the most important moments of their relationship, and practical advice on how waiting for everything—from dating to sex—can transform relationships, allowing you to find a deep connection based on patience, trust, and faith.

With warmth, intimate transparency, and spiritual wisdom, DeVon and Meagan put a fresh spin on modern dating and the keys to unlocking the code buried within life’s frustrating intermissions and heartbreaks. Complete with strategies and practical tips for surviving and thriving until THE WAIT is finally over, readers will be empowered as they discover how waiting for sex until marriage will help them achieve the love of their life and the life they love!

Sharing their faith and the impact it has had on their lives and relationship is part of their ministry. So it’s no surprise that they will join Dr. Bill Winston in the line  up of  Keynote and workshop speakers at the 2016 MISSIONS AND MARKETPLACE CONFERENCE,  which kicks off Sunday March 27 and will go through April 1.

Additional speakers for the conference include:

Evening sessions: 6:00PM to 9:00PM (Free onsite childcare is provided).
The 2016 Missions and Marketplace Conference is presented by the Joseph Business School in association with The Merge Symposium, Living Word Christian Center, Living Word Bible Training Center, AIDS Healthcare Foundation and Walgreens.
All speaker information can be found mm.billwinston.org. For more information or to register for daytime workshops, visit the website, call 866.816.4653 or follow @drbillwinston on Twitter.